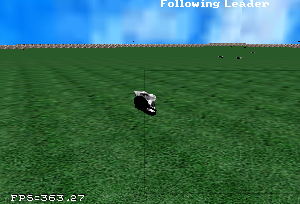 Screen shot from the Crystal-Space client. See!! there is a tank now!