From BZFlagWiki
Revision as of 17:04, 2 March 2009 by Me1 (Talk | contribs) (Some punctuation, some spelling, some grammar, some re-writing. | Some parts I wasn't sure about and couldn't figure out what they meant- can a HiX 'veteran' check it over? :D)
(diff) ← Older revision | Latest revision (diff) | Newer revision → (diff)
Jump to: navigation, search

HiX is a CTF and FFA map that is included with the BZFlag installation. It was created by Tim Riker 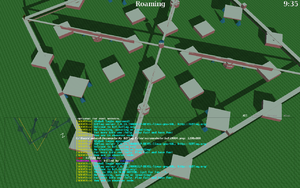 HiX's most prominent features are the raised "catwalks" that form a "High X." The map is made with two lines of symmetry, so it is a 4-way map. There are three main levels of play: 0 units, 15 units, and 30 units, 0 units being the ground, 15 units being the boxes on the ground and the lower catwalks, and 30 being the upper catwalks. There are 4 raised bases on each side of the map, centered on the outer wall, and vertically aligned with the upper catwalks. There is a fourth level at 45 units high, which consists of 5 boxes on the catwalks, 1 in the middle, and 4 behind each base. There are two teleporters located in each corner of the map which lead from the ground level to the upper catwalks. On each side there are two boxes turned 45 degrees in between the teleporters and the base. Under each base there are 4 pyramids, and under the lower catwalks there are 6 pyramids in each quadrant (these are set up to look like a support).

The HiX map is the signature map of the Games United League. In this league the map is set up to have two teams opposite each other--red and purple. The HiX map is also used in the 1vs1 League in FFA mode.