Difference between revisions of "Laser" 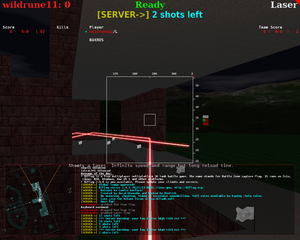 Players with the Cloaking superflag are unaffected by lasers. Many Cloaking flags are often added by map makers into a certain area to prevent camping with lasers in the area. Grabbing a Cloaking flag before driving through an area vulnerable to laser attacks is also a wise idea.