Difference between revisions of "Missile War 2.3"

Missile War 2.3 is a 2-team CTF map by Ducatiwannabe. It first appeared approximately in the end of 2007 and is one of the most popular maps as of early 2010. 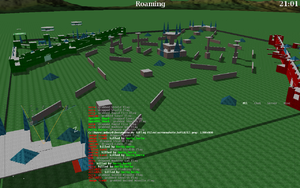 Some recent editions to the map include adding Cloak flags on each base to prevent spawn killing, adding a Bouncy flag on the Genocide tower, and adding Thief flags.