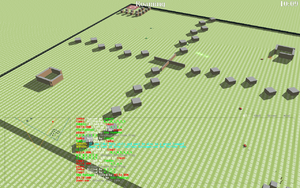 Teams should always have at least one tank defending the square containing it's team base. Otherwise it is easy for the opponents to spawn and steal the flag. If your base is undefended, go and defend it. This is especially important right after your team has stolen the enemy flag, because the rest of your team-mates will probably charge the enemy base leaving your base as an easy target for spawners.

If the enemy is not attacking then it is wasteful to defend a base with more than one tank, so if you see another tank defending, you then may leave the base and attack as fast as possible. However if the other defending tank is a newbie or otherwise lacking in skills, then you should encourage them to attack, so that you can stay back and defend. Sometimes it helps to drive very close to your base. This may cause the other defender to attack on their own.

It's good to often try to attack the opponents base along the far edge wall. It takes a little extra time to drive all the way to the edge wall, but once you are there it becomes easier to attack. One benefit is that the enemies may not notice you, so sometimes one can get close to the opponents base before being noticed. Secondly it is sometimes possible to shoot some defenders easily without much opposition due to the fact that they might be pointing in the other direction. (It can also allow team-mates the chance to shoot them as they start rotating towards you.)

Sometimes an enemy will hide behind a box. In this situation it helps to attack together with a teammate, so that you might be able to flank them.

If you have stolen your opponents flag one should always start out looking at the radar at lowest zoom, this is done to avoid choosing a route that takes one through an area which a situation of 1vs2, 2vs3 or so for the player which is carrying the opponents flag.

The one exception is that when your base has several opponents around it when one arrives. In this situation one has no chance to get through to ones base without help. And if one dies in the middle of a crowd of opponents then it becomes easy for them to save their flag. If this situation occurs, try to camp close to the edge wall just outside the square which contains your base. That causes the enemies in the square to turn around and attack me to save their flag, and then allows ones teammates to catch up and to have a chance to shoot them from the rear.

If an opponent has taken your flag, then one should try to stop him as quickly as possible. Sometimes this may require one to drive away from an opponent that is firing at you. Because one has no time to stop and shoot back. This can be frustrating, but the best way to help ones team is to attempt to save ones flag. Sometimes the enemy flag carrier is defended by a group of teammates. If this occurs one should fire at flag carrier rather than the opponents teammates. The problem if one fires at the opponents teammates the flag carrier is likely to get away and it doesn't help to kill his teammates, but if ones kills the flag carrier then it takes time for their teammates to pick up the your flag.