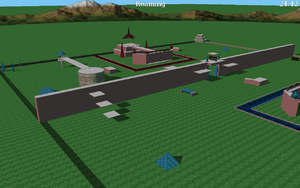 It has two elevated "castles" separated by a high wall that can be reached by only two teleporters. The team bases are on the castles which are surrounded by moats. The map is challenging because there are only two ways to travel between the sides of the map. If you teleport to the top and jump, there is a good chance you will be shot before you reach the bottom (given the wall's height). If you go through the "gate" in the wall, flanked by pyramids, it is very narrow so it is easy for you to be shot. If you shoot through it, you cannot use ricochet to hit tanks on the other side because of the pyramids. Tanks with Shock Wave are advantageous because they can drive above the "gate" and kill any tanks near it with nearly 0% chance of being shot (except by GM). The two sides are the same, but rotated 180 degrees from each other.